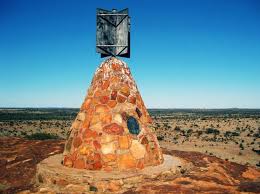 This trigonometric survey cairn, situated about 1 kilometer north of Mt Cavenagh Homestead, was built by officers of the Division of National Mapping in 1965 and was once the central reference point for all Australian surveys. It was named after Fredrick Marshal Johnston, former Commonwealth Surveyor General and first Director of National Mapping.

Today, surveys are based on the Geocentric Datum of Australia (GDA), a new and more accurate Australian coordinate system which has replaced the Australian Geocentric Datum (AGD) of which the Johnston station is a major part. Further information on Datum types and their applications are available from the geodesy pages, or from the Inter-governmental Committee on Surveying & Mapping (ICSM).