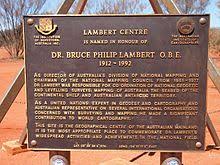 In 1988 the Royal Geographical Society of Australia determined, as a Bicentenial project, the geographical centre of Australia. A monument was erected to mark the location and named in honour of Dr. Bruce P Lambert, a former Director of the Division of National mapping, for his achievements in the national survey, leveling and mapping of the continent. Similar to the centre of gravity method, the location was calculated from 24,500 points at the high water mark of Australia’s coastline.

In the 1930’s when Dr C.T Madigan travelled through Central Australia he calculated the centre of gravity by using a metal cut-out of Australia with a plumb bob and string. His crude measurement was surprisingly accurate as he selected a point less than 11 kilometers due west of the present location.